Nock it off – Archery blog

Hi guys! I’m back from an archery adventure with my partner-in-crime/bestfriend/girlfriend and I’m as fresh-faced and inspired as ever! We had a journey of discovery, interesting smells and campsite survival.

I visited Merlin, scampered about amongst the oaks in Sherwood Forest and politely stormed the castles in Nottingham and Bolsover.

We started our adventure at Merlin Archery, which is an archery shop/range in Loughborough, Leicestershire. I had one goal in mind before stepping through the door, I wanted to leave with a new bow. After spending about a year with the Timber Creek Cottonmouth page regularly open on my Safari tabs, I pretty much had my mind already made up, no sales pitch necessary.

So as we pulled up, parking next to a statue (which looks a lot like something from the Body Worlds exhibition) of an archer showing off the V sign from the 100 Years War, which I’d explain but if I did that then I’d be cheating myself out of future content for blog posts.

Anyway, we pulled up in the car, parked the car, got out of the car, locked the car, walked away from the car and up the soft astroturf ramp to the door of Merlin.

Before going in, I’ll be honest, I was really nervous, because as a self-taught someone who shoots arrows alone most of the time, I was afraid of making a fool of myself in front of all the other archers. But I shook it off, put on my best Han Solo smirk and pretended I belonged there as much as everyone else.

The best way I can describe Merlin is by comparing it to a grown up version of what I remember Toys R Us to be like in the 90s, with pretty much everything I wish I could afford lining the walls, filling the store with colour and I’m pretty sure I heard an angelic chorus coming from the traditional corner of the shop. There were hundreds of bows, limbs and risers hanging along the walls, every brand, style and colour.

So far you’ve been reading for what might feel like an hour and I’m only just through the door, so you might see how this is going already.

After speaking to the first Merlin team member we could grab, he showed us round to what I’d affectionately describe as the Traditional Square of Merlin Archery before leaving us to look around. In this square were 2 rows of shelves on each wall, each lined with every different type of traditional bow, made of all the different types of wood you can imagine. I clocked the Timber Creeks to my left straight away, having spent months just staring at them on my iPad.

The wood in this room smelled amazing, but it’s not always appropriate to smell stuff in public, so I played it cool. Before even thinking to lift one of the bows off the shelves, I had to stop for a minute and just admire the craftsmanship involved in making these things. The hours and hours of work that go in to getting a bow just right is incredible, but that didn’t stop me from reaching out and lifting a Timber Creek off the shelf. The first one I touched wasn’t even a Cottonmouth, I picked up a green Diamondback take down, then a Viper and a Lil’ Rattler before going for a Cottonmouth. The Steve Irwins among you will notice that all the Timber Creek bows are named after snakes, which is horrible because snakes are evil. 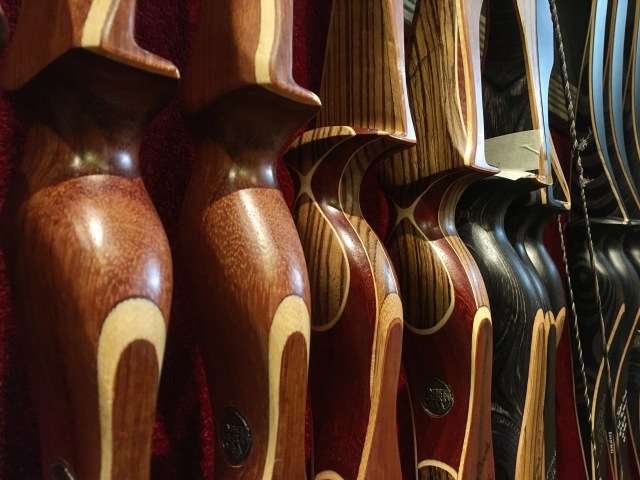 So there I am oogling at this treasure trove of wood and string, when a familiar face walks around the corner to check how we are.

I turned around to see Grizzly Jim, from Merlin’s YouTube videos that I’ve been watching religiously for the past few years, casually asking us if we needed any help, like it was no big deal, to which I did a double-take and said to my girllfriend, “Grizzly Jim is here”. Jim turned around as if to say “Who?”.

Once I got the fanboy out of my system, I told Jim I’d been interested in getting a Timber Creek for a year or so and that we were visiting over the weekend for my birthday. He told us about which bows he preferred, which ones he felt would be a better option for me, why not to go for certain models (which I really respected) and then offered us a drink and said he’d grab some bows for me to try out.

After about 5 minutes of me standing there with my mouth open, J Grizzle came back with a Viper and a Cottonmouth for me to play with. It wasn’t until after I left that I realised that both the bows he brought out were right handed, now maybe he just assumed that I, like the vast majority of society, was right handed, but I want to believe that he knew because of a secret magical ability to tell a left handed archer from a right handed archer without having to ask.

He strung up the bows without a stringer, which I’ve never dared to try but he’s a pro so what’re you gonna do, right?  Then he handed me them both and we headed down to the range to try them out. It’s probably not a secret that I was both terrified and excited at this point. Case in point:

As soon as we got to the range Jrizzly Gim gave me some wooden arrows to shoot with and encouraged me to get a feel for both the bows. Starting with the Cottonmouth, because that’s what this has all been about, I shot a few arrows, then did the same with the Viper. Almost immediately I decided that the Viper wasn’t for me, so I carried on shooting with the Cottonmouth.

After a little while of shooting, Jim stopped me and said “I think you might be a plucker…” 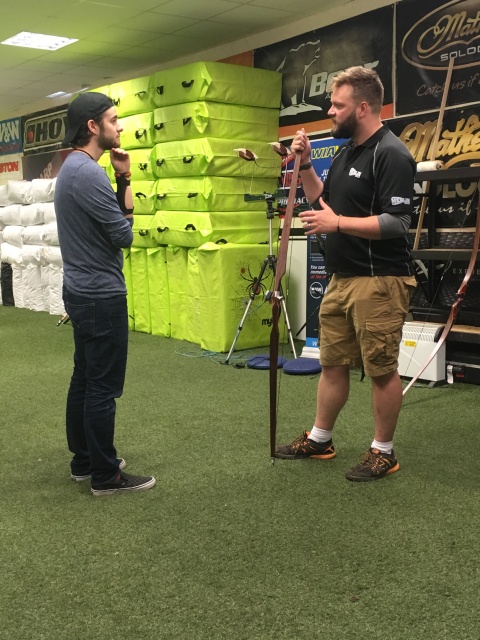 He then explained that (completely unbeknownst to me I’d like to add) when I release the string, I move my hand to the side rather than behind me. How’s that for free advice? So since then I’ve changed my shooting style and improved, which is good news if nothing else. We then chatted about mastering back-tension at which point I made a joke about using The Force and proceeded to break an arrow on my next shot, so there you go, do or do not.

After letting me ham away at targets for about an hour, GJ took the bow away from me to set it up with an arrow rest, nocking points, (his own) string silencers and even signed it for me. 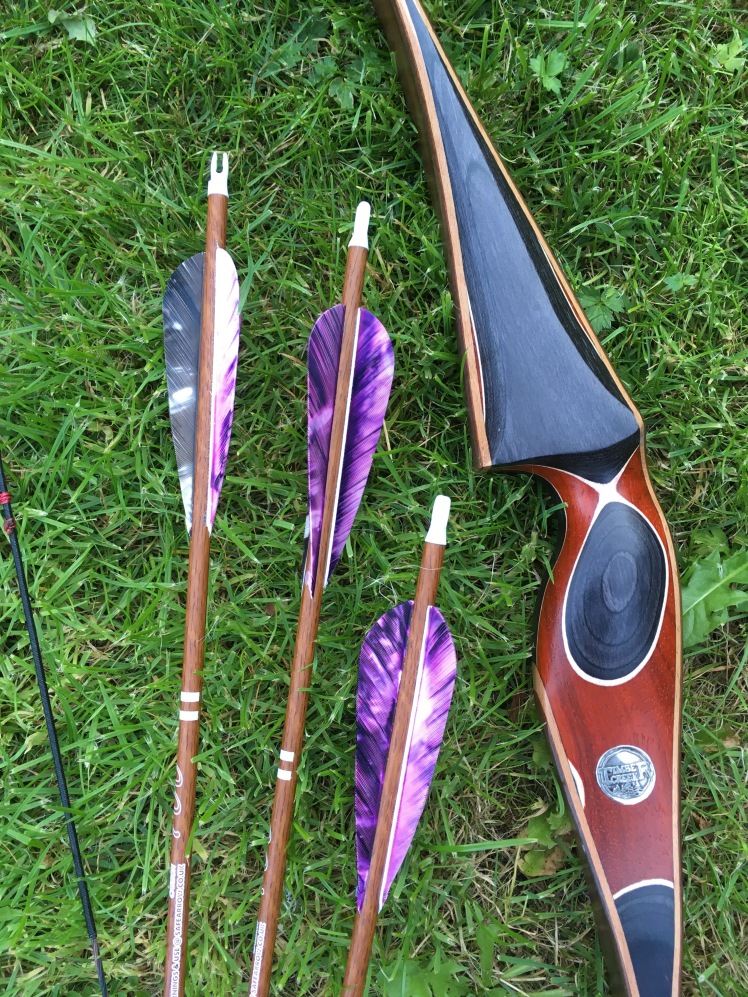 That’s the story about how I got my new Timber Creek (Grizzly Jim Edition) Cottonmouth Supreme, which I haven’t named yet but I’m thinking something Scottish because my bow has Cottonmouth misspelled on it, it says Cottonmouuth, which I read in a Scottish accent.

But the second to last thing Jim did before I left was take my order for some new carbon arrows and also gave me some wooden ones to play with as I couldn’t leave with my order that day.

The last thing we did was shake hands awkwardly, having to take a second attempt at it, followed by a quick hug before we left on the journey to our campsite.

3 thoughts on “Apparently I’m a plucker – Part I”